I'm not in the habit of promoting commercial products, but I shall now make an exception. Why? Because I'm truly gobsmacked at what it does, what it achieves within the domestic environment.

I'll do this posting in instalments. First, here's a snapshot, taken a few minutes ago, of the product in question, i.e. the Ace2Ace carpet cleaner: 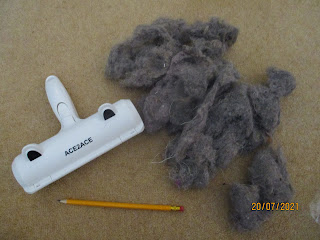 I've shown the device (hand, not power-operated) alongside what it's picked up from my household carpets (despite recent vacuuming!).

Enter Ace2Ace into search engines, and what do you see? Answer: prominent references to "pet hair removal" from carpets.  Indeed, that's how I first came across the device. Our two new(ish) cats had been leaving visible hair on our carpets, it had not been vacuuming up as easily as expected. Answer: I deployed an old-fashioned clothes brush initially, noting it was better than the vacuum cleaner, but not entirely successful. Thus the initial internet search under "carpet" and "pet hair", thus the initial introduction to Ace2Ace, followed by a payment of £13.99  to a well-known internet provider, and next day delivery.

That's when I got the surprise of my life. Why?  Because while the device did indeed scoop up pet hair, consigning in to a compartment, it did much, much more that that, of which there's scarcely a mention in the online literature.

The Ace2Ace device rejuvenated my ancient carpets (inherited from a predecessor). How, you may ask?

Answer - by removing more than pet hair - much much more!  Yes, scarcely visible in situ with the naked eye, but oh-so-visible when viewed in the  Ace2Ace collection compartment - which needed re-emptying at regular 5 minute intervals!

I have just given a mention, correction,  plug,  ;-) to this site and its latest posting. Where?  On my Shroud of Turin website:

Apols.  (I'll spare you the reasons, except to say this: website visibility via a major internet search engine doth play a role!).

Hare's a piccy showing the compartment in which the fluff is collected. It is easy to access - one simply lifts a flap on the topside of the device: 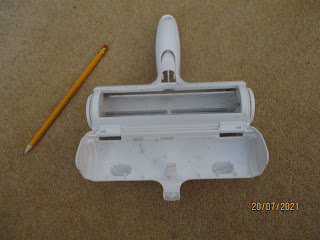 It's hard to know how best to sum up the internal geometry of the Ace2Ace carpet cleaner. It's both simple AND complex at the same time. Yes it looks simple, viewed intact from the outside, or even with the 'fluff collecter' flap opened to reveal and dispose of what's been collected. It's when one takes a closer look that one sees the simplicity (combined with effectiveness ) of its design. Why do I say that?

First, when you look at the underside, what do you see? Answer, at first sight it looks like a cylindrical roller lined with short stubby bristles, designed to dislodge hair (and dust!) from carpets. But no - the dislodging surface is not  a single continuous  bristle-lined cylinder. That's why one doesn't use the tool for long continuous runs across a carpet. There are in fact TWO wide strips of the 'dislodger'  mounted on the cylinder with intervening gaps.  That's why one uses the tool as if a paint roller, i.e. rolling back and forth over a shortish distance. That engages each of the strips in turn - one on the push stroke, one on the pull, gathering detritus  onto the separate strips each alternately and in turn.  But that alone would not transfer the muck to the collector. How is that achieved one might ask? Answer:  simple - but one has to look carefully within the guts of the tool to find the answer.

So let's see what the Ace2Ace is able to collect from a carpet, correction, a marked-out square metre of carpet.

I've chosen a stretch of carpet that is not noticeably strewn with pet hair, despite having one of our two kittenish-cats in attendance: 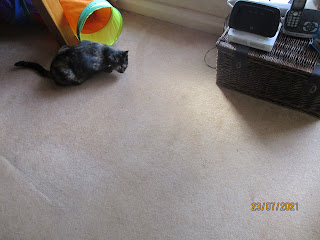 Next step - use a pair of steel rules to mark out a square metre: 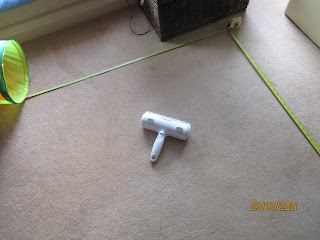 Next step: take a close-up photo of the Ace2Ace with an emptied fluff-collecting compartment: 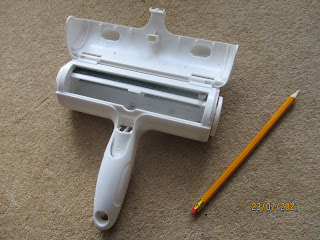 Here's the fluff  collected and stored from just half that square metre of carpet: 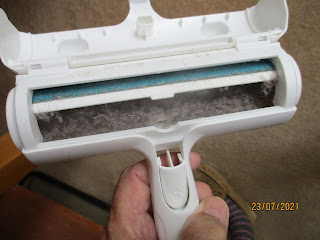 Now move to the unbrushed left side of the carpet (with t'other pussy in attendance): 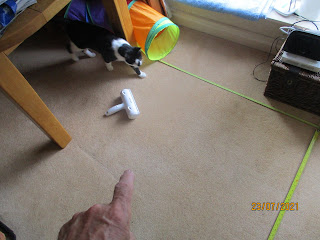 And here's what one sees inside the fluff-collecter  compartment after doing both halves of that marked-out square metre! 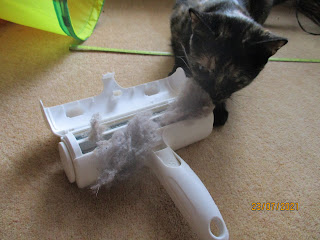 So how does the fluff get from the roller strips to the collecter compartment?  One has to peer closely into the narrow gaps between the cylinder and its outer casing (I did consider trying to get a piccy but thought better of it). In short, the answer is both simple yet ingenious from a mechanical point of view: the fluff-acquired cylinder makes contact with two additional strips of  bristly/stubble coating on the inside of the casing. They  gently and efficiently scratch off the fluff, the latter being dumped into the collector compartment.

As indicated earlier, I find the combined  efficiency and mechanical simplicity of the Ace2Ace simply gobsmacking.   It's not to be seen purely as a device for collecting pet hair. As stated earlier, it picks up months, nay years of microscopic grey fluff and dust, giving one's ageing carpets a new lease of life. The  Ace2Ace inventors have maybe not qualified  (yet) for a Nobel Prize.  But a  consolation Loud Bell Prize of some description, internet- or  (better still) MSM-mediated - is definitely warranted!

I'll leave it there for now.  Comments welcome...

Colin Berry, aka sciencebod, is a retired PhD researcher/teacher/academic who has worked in industry, medical schools, schools, food and biomedical research (mainly in the UK, but also in W.Africa and the United States). He's best known for his work on RESISTANT STARCH, recently described as "the trendiest form of dietary fibre". See also his specialist Shroud of Turin blog on www.shroudofturinwithoutallthehype.wordpress.com with over 350 postings to date. Oh, there's a second specialist site devoted to Stonehenge, Silbury Hill with some radical new thinking: https://sussingstonehenge.wordpress.com/